Monsters are creatures that appear in the different mythologies. Some are evil, neutral and good.

Monsters are considered offshoots of gods (as many of them are descended from or related to them) or cursed beings that terrorize, fight, and often kill demigods and heroes. They are "archetypes," born from the chaos and barbarism that always exists beneath Western Civilization. This means that they are purely abstract entities.

Monsters will merely reform in Tartarus and come back whenever their physical forms are destroyed. One example is when Percy Jackson kills the Minotaur on his first day realizing he is a half-blood. Four years later, he sees the Minotaur again in Kronos' Titan Army. This proves to be an ordeal for heroes, for after a monster is killed it can reappear and attack again, in any time period between weeks and hundreds of years. However, not every monster when killed goes to Tartarus. Some used to turn into yellow powder and vaporize on the spot, leaving a smell of sulfur and reform after some time.

Like the gods, monsters can fade from existence if they lose their will to live, and if people don't believe in them (like in the case of Pan), they will fade from existence. In the case of Briares' brothers, they had faded because no one believed in them, but Percy suggested that they also stopped believing in themselves. The same can happen to monsters if not enough people remember them, but Gaea managed to find a way to reverse this somehow, as she brought back Medusa's sisters, who Medusa had claimed faded in The Lightning Thief.

Monsters often serve as minions of evil and cause trouble for Olympus. Normally, since they can't hurt the gods directly, they go after their demigod children instead. However, some monsters, such as some Cerberus, Pegasus, and the Furies serve Olympus. There are other monsters like the cyclopes, dragons, harpies, hellhounds that work for Olympus or run wild on their own, and are not actively pursuing demigods unless they run into them.

When some monsters are killed, they leave a trophy behind (called a Spoil of War) in the form of parts of its body, its clothing, or some kind of armament.

Some monsters mentioned or seen include:

Typhon, the Father of all Monsters 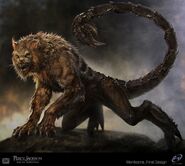 Medusa, of the Gorgons 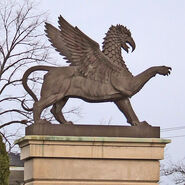 A statue of Gryphon

Monsters breaking through The Doors of Death
Español Polski
Community content is available under CC-BY-SA unless otherwise noted.
Advertisement