Nathan Fillion (born March 27, 1971 in Alberta, Canada) is a Canadian actor, best known for his portrayal of the mystery writer Richard Castle on the TV series, Castle. He also played the main lead role on the short-lived Firefly series as Captain Malcolm Reynolds. Fillion portrays the god Hermes in the film adaption of The Sea of Monsters, replacing Dylan Neal. 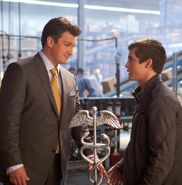 Nathan Fillion as Hermes
Add a photo to this gallery

Retrieved from "https://riordan.fandom.com/wiki/Nathan_Fillion?oldid=401733"
Community content is available under CC-BY-SA unless otherwise noted.