This article is about the man with the nickname. For the volcano, see The Beast.

Nero Claudius Caesar Augustus Germanicus, better known as simply Nero, was one of the most infamous emperors in Roman history. He is a descendant of the god Apollo. Nero is currently a god-emperor, as well as one of the three leaders of the infamous Triumvirate Holdings company along with Commodus and Caligula. He was given the nickname, "The Beast".

Nero was born on 15 December 37 AD in Antium, the only son of Gnaeus Domitius Ahenobarbus and Agrippina the Younger (Emperor Caligula’s sister). At the age of 16, Nero succeeded Claudius as emperor when the latter fell ill and died in the early hours of 13 October 54 AD, allegedly poisoned by Agrippina. However, Agrippina was domineering and Nero eventually had her killed in the fifth year of his reign (62 AD). He was married three times and became a widower as many times, his first wife, Octavia, being put to death by him on false charges of adultery.

The last of the Judio-Claudian dynasty, Nero was (according to Rick Riordan) responsible for the Great Fire of Rome which occurred on the 18th and 19th of July 64 AD, and only acted when the flames threatened his palace. At the time, he was thirty miles away watching from a tower in Antium. Instead of rebuilding the houses on Palatine Hill, he would use this cleared land to make space for his palace complex, the Domus Aurea (“House of Gold”). It contained his own lake, three hundred rooms, frescoes of gold, and mosaics done in pearls and diamonds. He also placed a one hundred-foot-tall bronze statue of himself, representative of the sun-god Sol, in his front lawn, called the Colossus Neronis (“Colossus of Nero”). Afterwards he blamed the Great Fire on the Christians and persecuted them endlessly, throwing hundreds to the lions and burning them alive on crosses at his parties if not for the sake of his own amusement, which is what Apollo noticed when he attended one of his garden parties.

End of Reign and Suicide

When construction expenses forced him to raise taxes and pillage religious treasures, support for Nero crumbled until Gaius Julius Vindex, governor of Gallia Lugdunensis, ultimately rebelled and declared himself emperor.[1] Nero was soon declared a public enemy (hostis ublicus) by the Senate, and in the midst of the chaos, he decided to commit suicide, stabbing himself in the throat with a dagger on the 9th of June 68 AD; supposedly, his final words were “Too late! This is fidelity!”[2] Soon after, Servius Sulpicius Galba, governor of Hispania Tarraconensis, took advantage of the situation and obtained the throne through military support, beginning the Year of the Four Emperors. The Colossus Neronis was placed near the Flavian Amphitheater (built by Emperors Vespasian and Titus between 72 AD and 80 AD), with the building later being referred to as the Colosseum.

Nero became a god-emperor but he didn't really like it all that much. During the Middle Ages, his name was almost forgotten and he was little more than a mirage. But then came the Renaissance, when the Roman classical greatness was remembered. What helped Nero more after that was the Internet, as this way he could not fade completely.[3]

Nero has moved to a tall building with a penthouse in Manhattan and (together with the fellow god-emperors Caligula and Commodus) influenced many events in history via Triumvirate Holdings. He used the company to supply funding to both Luke Castellan (during Percy Jackson and the Olympians) and Octavian (during The Heroes of Olympus).

At an unknown point in time, Nero killed Meg McCaffrey's father, and proceeded to take in and raise her as his own daughter. Through his sophisticated manipulation over the years, Nero has lead her to believe that he and "The Beast" were two separate people.

Hazel Levesque reveals that the nuns at St. Agnes Academy for Colored Children and Indians taught her about Nero, along with Caligula and Diocletian, and how they were total villains.

When Rachel Elizabeth Dare says that she is the Oracle of Delphi, Octavian doesn't believe her, and sarcastically says that he is the Emperor Nero. This makes Grover Underwood mutter that at least Nero could play music.

Nero first appears to Apollo in a dream in which he is falling down on the sun chariot in the shape of a bus. Nero tells Apollo he is his descendant. However, Apollo does not recognize him. Nero also appears in person in Delphi talking to Python about finding the Grove of Dodona. Apollo and Meg stumble onto the conversation. There, Meg refers to Nero as the Beast.

When Apollo and Meg arrive at the Grove of Dodona, Nero shows up with his two Germani guards. He explains how he is alive after many centuries and how it was easy to call back his men from Erebos. Nero has kidnapped the campers Cecil Markowitz, Ellis Wakefield, Miranda Gardiner, Austin Lake and Kayla Knowles as well as a Palikos named Paulie and threatened to burn them all in order to get Apollo and Meg to open the gate to the grove. He says that he intends to burn the grove alive and states that he wants to be diplomatic on the approach. Apollo refuses to cooperate and attempts to tell Meg how evil Nero is, Nero himself denies everything from burning Rome to killing people for fun. When Meg orders Apollo to open the doors, Nero immediately orders Apollo sustained and attempts to burn the captives. However, Apollo defeats the two Germani guards. Nero escapes after pouring Greek fire on the ground and setting it on fire. Then he orders his playmate, the Colossus Neronis, to destroy Camp Half-Blood in order to make it his new front lawn.

Nero frequently appears in Apollo's dreams while he is going to Indianapolis. In Apollo's dream Nero orders Meg to capture Apollo and to make sure there would be no difficulties like last time. She would be accompanied by a Germanus guard and a man named Marcus to prevent any mistakes. Nevertheless, Meg manages to escape them later on. He also took away her Karpoi, "Peaches", because he felt she didn't deserve a pet.

Commodus and Caligula talk about Nero as they sail to the San Francisco Bay Area. After the deaths of his co-emperors during the Battle of San Francisco Bay, Nero becomes the sole head of Triumvirate Holdings.

Knowing Apollo and Meg will head to New York City, he uses the Oracle of Delphi to find out when they will arrive and has his minions scout out every port and station in the city to find them.

Nero is exceptionally malevolent, ruthless, and bloodthirsty. He is known as one of the most evil and infamous emperors in all of Roman history (as well as one of the most evil people of all time). Nero is infamous for his tyranny and overindulgence in wealth and luxury with little regard to his subjects. He orchestrated the death of his own mother (despite her having helped him obtain the throne), had his stepbrother poisoned and his stepsister's husband exiled and later executed, along with his first wife. He refused to help the common citizens during the fire of Rome and selfishly prospered from it. He also killed numerous Christians during his reign (including Saint Peter), crucifying and burning many of them alive. He also has some charisma.

Nero is as intelligent and cunning as he is evil. He has been able to stay in the shadows for centuries with his mysterious organization Triumvirate Holdings. He has also successfully manipulated his young and impressionable stepdaughter Meg McCaffrey into giving unquestionable loyalty to him.

In The Hidden Oracle, Nero appears to be no more than 30 years old, but it is "a hard 30" (according to Apollo). Nero's face is haggard. His belly is distended from too much partying. Nero's mouth is fixed in a permanent sneer. His curly hair is extended into a wraparound neck beard. His chin is quite weak.

Nero tries to make up for his weak chin and his general ugliness with an expensive Italian suit of purple wool. He keeps his gray shirt open to display golden chains. He wears shoes made of hand-tooled leather. Even Apollo admits to somewhat admiring Nero's expensive, albeit somewhat impractical tastes.

As a God-Emperor, Nero can be assumed to be considerably powerful. He is limited however, as he was unable to locate Meg McCaffrey, thereby implying that he is a lesser power when compared to the true gods. He also has to work through Meg, implying that his powers are not freely manipulated like a god. This may be due to his lack of a domain which often dictates a deity's powers. 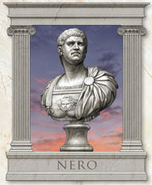 Retrieved from "https://riordan.fandom.com/wiki/Nero?oldid=554536"
Community content is available under CC-BY-SA unless otherwise noted.