Nymphs are minor goddesses or daimones (spirits) of nature responsible for its beauty and preservation, typically associated with a particular location or landform.

Like satyrs, nymphs arose when Ouranos' blood spilled on fertile soil after he was murdered by his own son Kronos. Originally, there were nine of them, led by Hagno. Together with the Meliai and Amaltheia they were among the beings that aided Rhea in protecting and raising a baby Zeus.

Nymphs are mainly responsible for the plants and animals within their own domains and were closely associated with nature gods, like Zeus, Poseidon, Demeter, Artemis, Dionysus and Pan. They dwell in mountains and groves, by springs and rivers, in trees, valleys or in cool grottoes.

They are often chased by love sick gods or satyrs for their beauty.

There are different nymphs and each of the many subspecies has its own name depending on what they preside over (E.g. Naiads are nymphs presiding over the sources of fresh water, with the Limnatides specifically governing lakes). 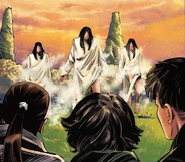 The Hesperides, nymphs of the sunset.