Riordan Wiki
Register
Don't have an account?
Sign In
Advertisement
in: Olympians, Councils, The Lightning Thief characters,
and 8 more

Also known as the Kronides, the first generation of Olympians are the six children of Kronos/Saturn and Rhea/Ops.

After the first war against the Titans, several gods assumed thrones on Olympus, mainly the children of Zeus.

After the Olympian victory in the second war against the Titans, some of the minor gods were granted positions on the divine council at Percy Jackson's request.

Changes in the Guard

Although they are technically Olympians, Hades did not hold a throne on Olympus before the conclusion of the Second Titan War and Hestia renounced her throne when Dionysus was made a god to avoid conflict among the council. To give amnesty and recognition to them, thrones were granted to several among the minor gods. Each of the Olympian counsellors is represented by a cabin at Camp Half-Blood.

As gods, the Olympians, and in particular the twelve council members, have extremely diverse personality traits that coincide with the realms and/or concepts that they represent. For instance, Zeus is typically stern, to the point, often abrupt, and authoritative, which coincides with his being the ruler of the sky and the king of the gods. His sister, Demeter, on the other hand, is shown to have a motherly, fussy, overbearing demeanor with an inordinate obsession with agriculture and related products. Hades is often bitter, angry, and resentful, which humans typically view as an attitude appropriate to the dead.

The twelve main Olympians do share several traits, however. The first and most important is that they are all easily offended. Almost all of the gods that so much as sense a slight against them tend to react ominously. Dionysus is often described as having purple flames appear in his eyes, and Hermes at one point transformed his caduceus into a cattle-prod when angered.

Each Olympian is also to some degree dismissive of the needs and desires of other gods, especially when they conflict with their own. Aphrodite was willing to allow Artemis to remain kidnapped, as she represented chastity and freedom from romantic love. Hera showed a similar disregard for certain elements of her family that threatened to unbalance her perfect family image.

Roman depiction of the Olympians

Olympians portrait in the Sea of Monsters film adaptation 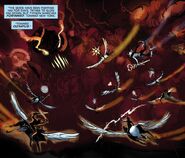 Zeus, God of the Sky and King of the Gods

Hera, Goddess of Marriage and Queen of the Gods

Poseidon, God of the Sea

Hades, God of the Underworld

Hestia, Goddess of the Hearth, Home and Family (gave up her seat)

Demeter, Goddess of Agriculture and the Harvest

Apollo, God of the Sun, Light, Music and Poetry

Artemis, Goddess of the Hunt, the Moon and the Wilderness

Hephaestus, God of the Forge 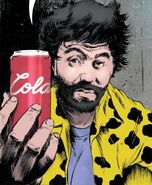