Riordan Wiki
Register
Don't have an account?
Sign In
Advertisement
in: Olympus, Palaces, The Lightning Thief places,
and 3 more
English

Home of the Greek/Roman Gods

This article is about the home of the Olympian gods. You may be looking for Mount Olympus in Greece.

Olympus is the home of the Olympian gods.

Originally located on Mount Olympus in Greece, it has steadily moved over to the west, following Western Civilization over the centuries, as Chiron explains in the very first book, The Lightning Thief. It had been in central Europe for about 500 years and is now in the United States of America. Instead of being located on a physical mountain, it is a metaphysical duplicate. This mountain does not connect with the ground and cannot be detected by mortals due to the Mist, but is connected to the mortal world by a space elevator. It is said to be hovering above the Empire State building. It possibly exists in another dimension, due to its floating with its great mass over a mortal city undetected. At the top of it is a large city containing the palaces for the Olympian gods, and residences for many minor gods and creatures of Greek mythology.

It is here that the gods commune, each having a massive throne, which are collectively arranged in a reversed U shape. It also houses some of the minor gods and magical creatures, such as the Ophiotaurus. Although it used to actually be located at the peak of Mount Olympus, it is now on the 600th floor of the Empire State Building, having moved with Western Civilization. The only mortal way to get up to Mount Olympus is pass a security guard in the lobby, who won't let you pass unless you have special authorization. Olympus is described as a paradise, with golden palaces, parks, and streets bustling with minor gods, godlings, nature spirits and demigods. Alongside the gods live hundreds of other creatures and beings.

Most gods live on Olympus, but a few others prefer to tend to their native kingdoms, like Hades and Poseidon, though Poseidon has a throne in the council while Hades does not. However, after the events of The Last Olympian, Hades now has a throne.

As the seat of power of the Olympian gods it is of vital importance. Should the thrones be destroyed, Olympus would crumble and the power of the gods would be severely weakened, making them vulnerable to their enemies. In theory, if it were destroyed and the Olympians regained enough strength, it could be reformed. In the meantime, they would be vulnerable to their enemies. It is unknown how the destruction of Olympus would affect the minor gods.

Following the conclusion of the Second Titan War, Annabeth Chase was given the honor of redesigning the destroyed Olympus. Olympus has also been known as the place where many important decisions are decided.

These gods are the greatest and most powerful of ancient Greece.

Although they are not as renowned as the classical Olympians, the minor gods of Olympus are still acknowledged and respected ever since they were given their thrones at the end of the Second Titan War.

On his first visit to Olympus, Percy Jackson returns Zeus' Master Bolt during the Summer Solstice and has his first encounter with his father, Poseidon and his uncle Zeus. Percy describes the throne room as making Grand Central Station look like a broom closet. Percy also says that he cannot believe that it is 300 feet in the air, just hovering above Manhattan [600th floor].

On Olympus, the gods voted whether or not to kill Percy and Thalia and also to figure out what to do about the Ophiotaurus and Kronos. The Ophiotauris was agreed to be kept in the throne room of Olympus. Once it was decided that Percy, Thalia and Bessie would be spared, the gods threw a spectacular party. With Percy stating: "There are normal parties. Then there are massive blow-out parties. Then there are Olympian parties. If you ever get a choice, go for the Olympian parties."

Percy, Annabeth Chase, Thalia Grace, Grover Underwood, Tyson, as well as other demigods and many hunters and nature spirits, defended Olympus, and succeeded; however, it was damaged greatly by Kronos' attacks on the gods' thrones with his scythe. When Percy sees Olympus empty, he describes it as extremely depressing. They are later rewarded and Annabeth, daughter of Athena, was chosen to rebuild and redesign Olympus as its official architect which was her dream. Percy was offered immortality, but he refused.

The giants are plotting to destroy the original Mount Olympus by going to Greece and destroying the roots of the gods, unlike the Titans, who thought they would destroy their new home in America.

Apollo is taken to Olympus after he regains his godhood by Artemis. All the Olympians meet to congratulate Apollo on successfully completing his quest. 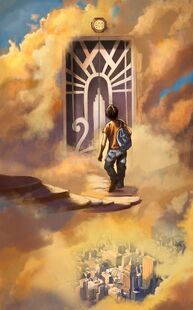 The elevator to Olympus 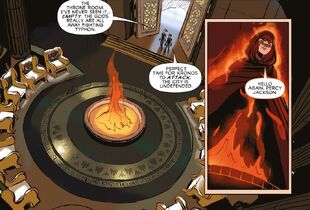 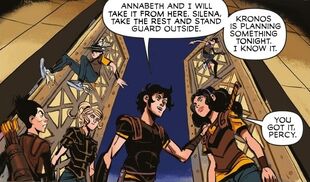