Start a Wiki
The Oracles are beings and places that can give prophecies in Greek mythology. Four of them are associated with the god Apollo. There are five of them.

The only oracle not affiliated with Apollo. It is instead sacred to the titan queen Rhea. This is the ​​​​​​​oracle in The Hidden Oracle.

This oracle is inhabited by the spirit of Apollo's demigod son, Trophonius, and it can also transmit vocal messages instead of prophecies. This is the Oracle in The Dark Prophecy.

Herophile, an oracle that speaks prophecies in the form of word puzzles. This is the Oracle in The Burning Maze.

The author of the Sibylline Books, this oracle is a nameless woman made near-immortal by Apollo. This is the oracle in The Tyrant's Tomb.

Also known as the Pythia, she resides at Camp Half-Blood and gives prophecies to demigods who are about to go on quests. According to tradition, the questers are required to consult the Oracle. This is the oracle in The Tower of Nero. 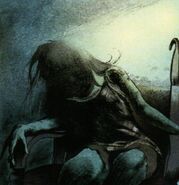 Add a photo to this gallery
Retrieved from "https://riordan.fandom.com/wiki/Oracles?oldid=543294"
Community content is available under CC-BY-SA unless otherwise noted.