Percy Jackson’s Greek Heroes is a collection of stories from Greek mythology told from the point of view of Percy Jackson.

This book was revealed at The Blood of Olympus tour event as a sequel to Percy Jackson's Greek Gods. Later on October 14, Rick Riordan announced the book's cover and its release date, August 18, 2015, on social media.[1]

Who cut off Medusa's head? Who was raised by a she-bear? Who tamed Pegasus? It takes a demigod to know, and Percy Jackson can fill you in on all the daring deeds of Perseus, Atalanta, Bellerophon, and the rest of the major Greek heroes. Told in the funny, irreverent style readers have come to expect from Percy, (I've had some bad experiences in my time, but the heroes I'm going to tell you about were the original old school hard luck cases. They boldly screwed up where no one had screwed up before. . .) and enhanced with vibrant artwork by Caldecott Honoree John Rocco, this story collection will become the new must-have classic for Rick Riordan's legions of devoted fans--and for anyone who needs a hero. So get your flaming spear. Put on your lion skin cape. Polish your shield and make sure you've got arrows in your quiver. We're going back about four thousand years to decapitate monsters, save some kingdoms, shoot a few gods in the butt, raid the Underworld, and steal loot from evil people. Then, for dessert, we'll die painful tragic deaths. Ready? Sweet. Let's do this.

Just like Percy Jackson's Greek Gods, several examples of Anachronism are within this book which are probably intended to be merely jokes.

The Argo being rowed through the Clashing Rocks

Map of locations mentioned in stories

Perseus and his mother are put to sea in a box 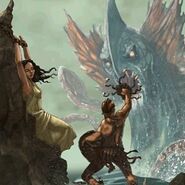 Perseus defeats a sea monster with the head of Medusa, saving Andromeda

Psyche receives help in retrieving water from a sacred spring

Otrera dedicates a temple to the war god, Ares

Daedalus watches in horror as his son, Icarus, falls from the sky

Theseus pins down a pine tree

Sciron falls into the maw of his giant pet turtle, Molly

Atalanta races against her suitors 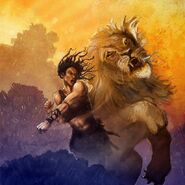 Orpheus in the Underworld with Charon 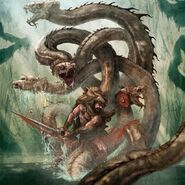 Hercules battles the Hydra of Lerna

Jason and the Golden Fleece 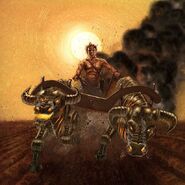