A portal is a magical gateway between locations.

Portals can only appear at auspicious moments. Some of these are described as being high noon, sunrise, a god's birthday, an alignment and various other things. Most magicians memorize these moments, but Sadie Kane believes that these auspicious moments are happening all of the time and thus a portal can be opened nearly any time of the day. Objects that are naturally inclined to be gateways are obelisks, pyramids, and items with significance in Ancient Egypt, such as the Temple of Dendur. Once a portal is opened, they require a twelve-hour cooldown before either the portal of origin or destination can be used again.

Objects that can be used don't have to be from Ancient Egypt itself as long as they are representative of it: Bes is able to use griffin statues in London to open a portal that were build well after Egypt fell and later the Egyptian Bridge in St. Petersburg which was built in the 18th century. Where the portal comes out depends on where the object it connects to is in that city. For example, for London there are many possible objects and unless one is specified, its apparently random, but in Alexandria the portal is underwater as the object is also there. If a portal is opened with only a country in mind its not specific enough, the location that it goes is the default portal for that country. For example, Sadie Kane opened a portal with the destination of America in mind and it sent her to the Washington Monument, the default portal for America.

Portals cannot be used during the Demon Days starting at sunset on the 26th, but it is possible for a god of magic to open one or a godling who has fully merged with their god. Gods can open portals, but most have the same limitations as magicians, needing powerful enough artifacts to open one between. However, both Thoth and Isis can open portals anywhere as could Sadie Kane while merged with Isis and Anubis has shown this ability as well. Bast lacked the ability to open a portal while Bes was skilled at it and seemed to have a great knowledge of portals and their locations. Ptah could only open portals like a magician, but he could open one in an area cursed to prevent that and he could use a god as the anchor on the other end. While magicians can only open portals at auspicious moments, gods seem to be able to open portals at any time as Bes never seemed to consult any sort of timetable when transporting Sadie and Carter around.

Under attack by Set's forces, Bast leads Carter and Sadie Kane to the Metropolitan Museum in order to open a portal using an Egyptian temple inside. Sadie proves to be unable to open a portal, but Zia Rashid shows up and manages to hold off Serqet and open a portal that they escape through.

Later, Zia uses a portal to transport herself and the Kanes from the First Nome to Luxor for training. After Iskandar's death and with Michel Desjardins intending to kill the Kanes, Zia orders Carter and Sadie to use a portal to escape. Under attack from sphinxes, Sadie manages to open a portal to Paris and they escape. Carter inadvertently pulls one of the creatures through with them, but Bast appears and kills it.

After stealing the Book of Overcoming Set from Desjardins' house, the three flee to the Louvre where Sadie struggles to open a portal to America. Sadie finally succeeds with the help of Isis, but the portal opens off of the ground, forcing the three to jump through it. As Sadie didn't specify where in America she wanted to go, the portal takes the three to the default gateway for North America: the Washington Monument in Washington, D.C. Bast warns Sadie that the monument will take twelve hours to cool down and by then, the Demon Days will have begun during which time all portals will be shut down. As a result, Carter, Sadie and Bast are forced to make their way across America by mortal means.

When the Kanes meet Thoth, the god uses a portal to transport them to and from Graceland. Thoth explains that as a god of magic, he can open portals even during the Demon Days.

During the Battle of the Red Pyramid, Sadie decides to transport the pyramid from the desert to Washington, D.C. in order to cut it off from its source of power. When Set points out that a magician can't open a portal during the Demon Days, Sadie tells him that a goddess of magic can, having become the Eye of Isis. As a result, Sadie successfully opens a portal that sucks the Red Pyramid, the Kanes, Set, Set's forces and the House of Life magicians through, depositing everything outside of the Washington Monument.

Days after Set's defeat, Anubis arrives at Brooklyn House to transport the Kanes through a portal into the Duat and back when they are done.

Over the months following the defeat of Set, the Kanes have added an stone sphinx from the ruins of Heliopolis to Brooklyn House to use to generate portals rather than having to find one elsewhere. Sadie uses a portal to travel to London for her birthday, emerging at Cleopatra's Needle. After learning of the events in London, Carter and Walt Stone use Freak to reach the Brooklyn Museum and open a portal there since their own portal still needs to cool down.

After rescuing Sadie and her friends from Babi and Nekhbet, Bes uses a portal to transport himself and the Kanes to the Eighteenth Nome in Russia to steal Vladimir Menshikov's part of the Book of Ra.

Following the Kanes' theft of the second piece of the Book of Ra, Set reveals that the third piece is in Bahariya, much to Bes' dismay as it means that they will have to use the Alexandria portal to reach it. Under attack by Menshikov's magicians, Bes' limo has a tire popped as they attempt to escape through a portal on Egyptian Bridge. The limo slides through the portal upside-down and emerges underwater as all of the Alexandria portals are in the part of the city that's submerged. Bes later explains that Bahariya is protected from portal travel which is why they had to go to Alexandria instead.

In Bahariya, Ptah opens a portal to send Sadie and Walt to reunite with Carter, Zia and Bes. He also advises them to use the Great Pyramid at sunset to open a portal into the Duat. The god anchors the portal on Bes himself, causing it to open beneath Bes and spit out the two magicians. When the portal opens, Bes' magical cage sinks partially into it, breaking the cage and freeing Bes. Bes later informs Carter that with the equinox approaching, all portals are now shut down until sunset.

At sunset, Sadie opens a portal for herself and Carter at the top of the Great Pyramid, leading them to the dock of Ra's Sun Boat in the Duat. Zia and Bes depart to use a different portal to reach Brooklyn House.

When Desjardins execrates Apophis, the spell causes a portal to open under the Chaos serpent and suck him deeper into the Duat as a god can't be killed by an execration.

At the conclusion of the Battle of Brooklyn House, Sarah Jacobi, Kwai and their surviving forces use a portal to escape.

It's mentioned that in the six months since Apophis' rise, portals have become unreliable, causing the Kanes' and their initiates to mainly rely on Freak the griffin for travel instead.

After the events at the BAG dance, Sadie and Leonid use a portal set up by the Kanes at the school to travel to the First Nome, Carter and Walt having taken Freak to see Thoth. The portal drops the two in midair, but Leonid is able to channel the power of Shu to get them safely to the ground.

When Sadie and Zia Rashid go to see Bes in Sunny Acres, Sadie contacts Isis to open a portal for her into the Duat. She later contacts Isis again for a portal to the Nile River delta, but the goddess, out of annoyance over Sadie's refusal to become her host again, drops them off miles from their actual destination.

After merging, Walt and Anubis open a portal for Sadie to the Land of Demons, unable to follow her through it due to Walt's weakened state. The portal drops Sadie right on top of Setne at the edge of the Sea of Chaos. When an army of demons appear due to the distress call of Apophis' sheut, opening a portal using the obelisk that the sheut was anchored to is briefly discussed and discarded.

Following the destruction of Apophis, magicians from all over the world use portals, now working properly again, to travel to the First Nome to help deal with the aftermath of the battle and to attend Carter's coronation as the pharaoh of the House of Life.

The gods later open a portal for the Kanes to visit their parents and friends in the Duat before it returns them to Brooklyn House.

The Staff of Serapis

Sadie tells Annabeth Chase that while they need reinforcements, she doesn't have the energy to open a portal even if she could find one. 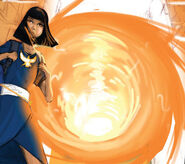