The Protogenoi (sing. Protogenos, also known as the primordial gods) are the first race of immortals to come into existence and were born directly from the void of Chaos. Unlike the Titans and the gods, they are essentially sentient aspects of the universe itself and have absolute and total control over it, so therefore they cannot truly be killed.

Protogenoi can manifest in physical form as seen with Gaea, Ouranos, Tartarus and Nyx. They can be banished from manifesting in the world physically, but their consciousness can never be destroyed. Even the power of Kronos' Scythe and other weapons of immense power are ultimately only able to disperse their physical forms and can’t truly destroy them.

Birth of the Protogenoi

Initially, all the matter in the cosmos drifted around in a gloomy, soupy mist called Chaos, the first of the Protogenoi. Eventually, some of its matter collected to form the earth, which developed a personality that called herself Gaea. After a period of time, the sky appeared: a great dome above the earth that became Ouranos. He married Gaea and had several children together, whom he hated and she loved. Gaea alone gave birth to the mountains, Ourae.

Water pooled out of the mist of Chaos and formed the first seas on earth, that like his predecessors, developed a consciousness: Pontus. Finally, another dome emerged from Chaos. Unlike Ouranos, this was Tartarus, the Pit of Evil right beneath the Earth itself. Both of them harboured feelings for Gaea, which made her relationship with Ouranos rather difficult.

Other Protogenoi also appeared from Chaos, namely Erebos, the Darkness and Mist, Nyx, the Night, who was born with the help of Tartarus, and Akhlys, Misery and Poison, who was created with the help of Nyx. From the union of his children Erebos and Nyx, it was born Aither, the Upper Air and Light. Without the aid of a consort, she gave birth to Elpis, the Spirit of Hope, and Hemera, who ironically was the Day.

Although Gaea originally wanted the Olympians to win this war as she helped her favorite daughter's children from her then youngest son's cruelty, she became unhappy with the way the Olympians defeated her children. With Tartarus, she gave birth to another brood of children, Gigantes, each one of them born to oppose a certain god. As the giants could only be killed by the combined power of a god and a demigod, the gods called upon Hercules and Dionysus, two of the most powerful demigods ever to help them defeat the giants.

Later, Gaea gave birth to her most powerful son, Typhon, whom Zeus defeated with the help of several other gods using trickery. With the last child of hers defeated, Gaea admitted defeat and fell back to her slumber.

Following the end of the Second Olympian War, Gaea stirred from her slumber and began raising the Gigantes from Tartarus to oppose the Olympian gods, causing several deceased beings to return to life. Even other Protogenoi actively began to participate in the war: The Argo II was attacked by the Ourae when it tried to cross the Apennine Mountains, as they are children of Gaea. After falling into Tartarus, Percy Jackson and Annabeth Chase encountered Akhlys, Nyx, and finally the embodiment of Tartarus himself.

Through the combined efforts of Iapetus and Damasen fighting him off, Percy and Annabeth managed to escape from Tartarus. At the end of the war, Gaea was dispersed so thin that hopefully she wouldn't be able to form a consciousness again, as had happened to Kronos.

As they are the very components that make up the universe, Protogenoi have complete control of the domain they represent, which can rival or even exceed that of gods who preside over them. In addition, all the Protogenoi wield immeasurable power, rendering them the most powerful beings in the universe.

As the sentient aspects of the Universe itself, all Protogenoi are incapable of truly dying. Even if they were to be scattered and their physical form permanently destroyed, they would remain both alive and immortal.

Most Protogenoi appear to be capable of manifesting in physical form to interact with lesser beings: Ouranos was able to appear in the form of a "tall, buff guy with longish hair", but still retained physical traits native to his domain, such as his skin being "blue with cloudy patterns" during the day and "dark with glimmering stars" during the night.

Despite their great power, Protogenoi are still susceptible to being weakened to the point of dormancy. This is shown when Ouranos was ambushed by his sons and had his physical body cut to pieces by Kronos with the scythe. After the murder, Ouranos' essence was scattered and his physical form permanently destroyed, but he remains alive and immortal nonetheless.

Furthermore, if separated from their domain, Protogenoi are relatively less powerful than they would be if they were in their element. This was exploited both by the Titans in the killing of Ouranos and by Jason Grace when he used his aerokinetic powers combined with Festus to sever Gaea's contact with the earth, ultimately leading to her defeat when she was blown up by Leo Valdez's fire supernova and a missile. 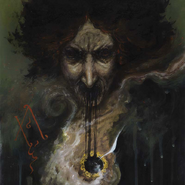