Ptah is the Egyptian god of creation and technology.

In the ancient past, Ptah sent a swarm of rats to drive back an army intent on invading his sacred city of Memphis.

Sadie and Walt first saw his statue in a burial site under a water tower which the Sadie managed to destroy due to a spell. Hosted by a date farmer who had been going after Sadie and Walt with a rifle, he helped Sadie and Walt escape from Mad Claude and the mummies that attacked them when Sadie refused to surrender the ceremonial knife given to her by Anubis. As he ran out of time as his host could no longer hold him, he opened a portal to Carter and Bes, anchoring it on Bes and then disappeared. He also apologized for not coming earlier when they called, but it took awhile for him to get through the Duat and he wanted them to open the blocked doorway they'd called him for as he could only open one doorway per person who called him and wanted to save it for a portal to Carter, Zia and Bes.

He likes answering the prayers of those who call them like, for example, Sadie and Walt and his city, Memphis.

Ptah possesses a striking similarity to Osiris with his blue-toned skin but with milk-white eyes.

Ptah can create things by speaking their names (such as once he made up the word 'platypus' for fun, and thus the platypus was born.) and he also has the ability to open portals at will even in a place that was cursed so no portals could be used, though unlike Isis or Thoth and like Bes, he can only open portals between powerful enough artifacts, though he showed the ability to anchor the other end of his portal on a god so Walt and Sadie could go exactly where they needed to go. This is likely due to his ability to open any door, though he tells Sadie and Walt that he can only open one door per person who asks for one. He also showed the ability to summon or create a horde of rats and control them so they could destroy an army of living mummies.

Ra: Ptah commented that he always liked Ra and got along with him. Presumably, he supported the return of Ra because Ra was his father. 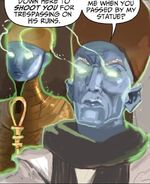