Shapeshifting is the magical ability that one has to change his/her age, size, sex, species, facial features and so on. Frank Zhang's family and children of Loki and some of Aphrodite's are the only mortals known to use this ability.

Gods and Titans are beings of pure, radiant energy in their true form, but since it's too dangerous to simply look at them in this form (or being in their presence if it is Kronos), both beings are able to assume physical form in order to safely interact with "lesser beings". For the most, their appearance is that know on myths "adapted" to the current world potency's culture (Zeus, for example, is described as an "angry-looking hippie" wearing a tuxedo), but they can change their form into anything that they want to be, with Athena and Hypnos having turned into birds in the past, Poseidon and Demeter having a horse as a child, due to having reproduced in form of a stallion and a mare respectively. Of all the gods, however, Zeus is notorious to use shapeshifting to disguise himself from Hera during his affairs with other women, having turned himself into an eagle, a swan, a bull, a woman, and even a rain of gold. As the Goddess of love and the personification of beauty, Aphrodite or Venus 's true appearance is actually unknown as she would appear to others as their personal epitome of physical attraction as the Goddess of Beauty, Aphrodite could change her appearance at will, depending on the perception of beauty of the person she is in the presence of as mentioned in Percy Jackson's Greek Heroes, her son Eros has inherited this ability of hers

Not all shapeshifting by immortals is for pleasure. Rather, its a way that nymphs, for example, have used to protect themselves from gods' affection, with Daphne and Siringe, for example, having turned themselves into plants to avoid Apollo and Pan respectively.

As well as Empousai, the Furies can also shape shift. Alecto posed as Percy's math teacher, Mrs. Dodds, and as a lawyer to get Nico and Bianca di Angelo out of the Lotus Hotel.

The only Norse deities who can shape-shift appear to be Odin and Loki, with the latter even giving birth to the colt Sleipnir while in the shape of a mare.

Fox Spirits are gifted with the power to transform themselves into other beings and inanimate objects such as tables and chairs.[1]

Normal humans have no natural power to change form, but some mortals may inherit this power though divine ancestry, also known as a Legacy. The Zhang family, for example, are all descendants of Periclymenus, mortal grandson of Poseidon, and they all inherited his ability to turn into animals. Examples include Frank Zhang, who is capable to turn into both normal and mythological animals like when he turned into a dragon, and his grandmother who was apparently forced to flee for her life in the form of a small bird. Frank's mother was a Canadian soldier who had attempted to use her shapeshifting in Afghanistan to help the American troops. The plan was unsuccessful, since she was killed in the action.

Other mortals that shapeshift without inherent power normally change form as a result of divine punishment upon them. Indeed, some monsters like the Gorgons and Lycanthropes were originally normal human beings that somehow offended the gods and were turned into monsters as punishment. Not all forcefully shapeshifting is punitive, though. Rather, this may be a way for gods to protect their loved ones from the fire of other gods. This is evident in Zeus' case with Io, when he turned her into a heifer to hide her from Hera, and several centuries later with his daughter Thalia Grace, as she was gravely injured in a fight against Underworld monsters, Zeus turned her into a tree to avoid Hades from claiming her soul. Due to Kronos' manipulation, Thalia and the tree now exist as separate entities. As their mother is the Goddess of love and the personification of beauty the children of Aphrodite are capable of shapeshifting limited to physical features

Norse demigod children of Loki also can shapeshift, and are able to take the form of both different people and animals. 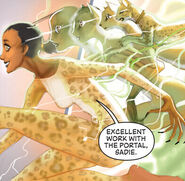