The Titan's Curse
The Last Olympian
The Son of Neptune
The House of Hades
Spartoi, or Skeleton Warriors, are monsters who are formed from ancient dragon teeth that are placed in the ground.

In Greek mythology, the Spartoi were creatures that were created by planting the teeth of a dragon sacred to Ares that was killed by Cadmus. Once the hero removed the teeth from the fallen monster, he planted them in black soil and plowed the land with a breed of ox that was rumored to have extremely thick armor plating. When this was done, from every tooth in the ground, a warrior clad in full Greek armor would burst from the earth. Cadmus later threw a jewel in the recently created Spartoi to determine who was the strongest, and only five survived the fighting. Those five later helped build the city of Thebes, and many of its inhabitants were descended from them.

In modern times, the most effective way to destroy them is to get them to fight each other and cause themselves to kill each other. Because of this, in most cases attacking and actually killing a Spartoi would be nigh-impossible unless you were a child of Hades. Spartoi can always reform, even if one removes the limbs from their body.

While in New Mexico, the Spartoi attacked Percy Jackson, Thalia Grace, Zoë Nightshade, Grover Underwood, and Bianca di Angelo. When they shot them with arrows, nothing happened. However, when Bianca stabbed one with her Hunter's knife, it erupted into flames, leaving a small pile of ash behind. She was only able to destroy it because she was a child of Hades, although at the time no one knew her parentage.

After Bianca died, the group encountered more spartoi at the Hoover Dam and Percy was separated from the group after hiding in an elevator that takes him down inside the dam. He then runs into Rachel Elizabeth Dare for the first time and she saves Percy by confusing the spartoi long enough for him to escape into the Hudson River. Percy and his friends regroup to try and escape. Thanks to some advice from Athena in disguise and two giant angel statues brought to life by Zeus, the angels give the four of them a ride to San Francisco.

Later, while at camp, Percy figures out that Nico's father was Hades, because the spartoi appear and Nico di Angelo unintentionally splits the earth to swallow them up. Nico tells Percy that he hates him for not saving his sister and runs away.

Frank Zhang was given a dragon tipped spear by his newly discovered father Mars, with a golden shaft that could summon a Spartoi which he named Gray, but he could only summon him three times, with a 24-hour wait in between each charge. He used the first charge to kill a group of Basilisks left by the Gigantes, Polybotes. The second to kill a group of six Laistrygonian Giants, however Gray didn't fully listen to Frank and destroyed the giants instead of distracting them like Frank originally said. The third time, Frank used Gray to protect a group of people from a gryphon attack after their train crashed. The spear then dissolved, having used his last charge.

While in Tartarus, Percy, Annabeth, and Bob encounter one of the spartoi created from saber-tooth tiger teeth. Bob names it Small Bob and it accompanies them on their journey, presumably sacrificing itself with Bob and Damasen to save Percy and Annabeth from Tartarus.

The spartoi have transparent gray skin that makes their bones visible, and yellow eyes. They wear gray muscle shirts, camo pants, and combat boots. Their clothes shift and look like a uniform at different places and times, they also have the weapons of who or what they are impersonating. They have appeared wearing police garbs, military outfits, and security guard uniforms. 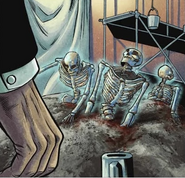