Riordan Wiki
Register
Don't have an account?
Sign In
Advertisement
in: Storm Spirit, The Lost Hero characters, The Mark of Athena characters,
and 3 more
English

Storm spirits (also known as Ánemoi Thúellai (Tempest-Winds) in Greek and Ventī (Winds) in Latin) are creatures of chaos that Aeolus keeps locked away in the hollows of his island. They were created when Typhon was defeated by Zeus and later Poseidon. They serve Gaea in The Heroes of Olympus series.

Dylan is a storm spirit sent to kill Jason Grace, Leo Valdez, and Piper McLean. He proceeds by calling forth two more of his brothers. All three of them then proceed to attack the young demigods and the satyr, Gleeson Hedge, in the name of a mysterious mistress. Two of them are easily killed by Jason, but Dylan escapes taking Coach Hedge as captive when Hedge protects Leo from Dylan.

Later, Jason, Leo, and Piper visit Medea's mall where they find the storm spirits, a captive Hedge, and learned that she helped kill Leo's mother years earlier. In order to see Aeolus and convince him to help them, Jason, Leo, and Piper capture the spirits to present to him. When they finally arrive at his island, the wind master has them imprisoned before releasing the spirits to kill them on Gaea's orders.

Later on, at the Wolf House, they ambush the demigods under the command of Khione. Jason tames one of them, names it Tempest, and uses its power to dispel all the others. Somehow, it managed to survive Hera's burst of energy when she revealed her divine form though it's current whereabouts are unknown.

When Kymopoleia attacks the Argo II, she summons a lot of storm spirits to help. In order to breathe underwater, Jason captures what he determines to be the biggest and meanest like he would a bully. It causes the other spirits to briefly pause and Jason uses his captured spirit to breathe as he and Percy descend to face Kymopoleia and Polybotes. Over time, the air he gets from the spirit grows stale and thin, but the spirit unexpectedly helps him during the battle with the giant, pulling him out of the way of an attack causing Jason to think he's going to get it some special air-freshener as a reward. After Polybotes is killed, Kymopoleia reveals that the spirit is asking to be released upon returning to the surface as it helped Jason and it promises not to attack him a third time. To Jason's surprise and disgust, the storm spirit is actually his old enemy Dylan who wanted revenge but regrets it due to the strength Jason has gained since they last met. Jason quickly promises to release Dylan and does so upon returning to the surface.

In addition to their inherent immortality, storm spirits possess the following abilities:

Storm spirits' appearance also depends on who sired them. For example spirits sired by Notus/Auster, were described as being "made of fire, sand and hot thunderstorm." 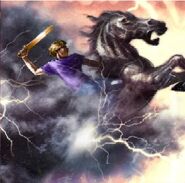