Riordan Wiki
Register
Don't have an account?
Sign In
Advertisement
in: Homes, The Throne of Fire places, The Serpent's Shadow places
English

Sunny Acres Assisted-Living Community, formerly known as the House of Rest, is a retirement home for the gods located in the Fourth House of the Night in the Duat.

Sunny Acres has a limestone archway, like the ancient temple of Luxor, located on the shore of the Lake of Fire. The sign carved into the archway is in hieroglyphs and says, "Sunny Acres Assisted-Living Community. Formerly the House of Rest. Under New Management." There is a limestone gateway that leads to a large open hall. Rows of colorfully painted columns that are studded with iron sconces holding blazing torches. Potted palms and flowering hibiscus plants were placed here in a failed attempt to make it feel cheerful. Large windows looked out on the Lake of Fire. The walls are painted with scenes of the Egyptian afterlife, along with hieroglyphic mottos like "Immortality with Security" and "Life Begins at 3,000"!

Glowing servant lights and clay shabti in white medical uniforms bustled carrying trays of medication and pushing wheelchairs. A dozen withered patients in linen hospital gowns sat around the room, staring vacantly into space. A few wander the room, pushing wheelie poles with IV bags. All wear bracelets with their names in hieroglyphs.

The nurses' station is a crescent-shaped desk of granite with a row of telephones, a computer, lots of clipboards, and a sundial. Behind the counter, there's a whiteboard with the patients' names and medication times. The patients' bedrooms have beds and a TV.

It houses forgotten Egyptian gods (such as Fire-Embracer and Hot Foot, who are rehabilitated to their former positions in The Serpent's Shadow) which are being taken care of by Tawaret. Sadie Kane says that she doesn't like "old people places" like Sunny Acres. Carter Kane and Sadie come there and meet Tawaret. Tawaret helps them on their quest to revive Ra. They eventually find him and leave Sunny Acres.

The old and forgotten gods of Sunny Acres help the Kanes battle the forces of Apophis in the Land of the Demons. Sadie Kane (after finding Bes's shadow) restore Bes back to his original state. 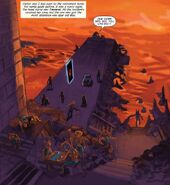