Teleportation is the ability to instantaneously move one’s self or others from one location to another without occupying the space in between.

After Percy Jackson returns the Master Bolt to Zeus, the king of the gods teleports away to cleanse it.

After Artemis is freed from the Titan's Curse and she watches Zoë Nightshade die in her arms, she teleports away to Olympus.

After giving Percy a Sand Dollar for a fifteenth birthday present, Poseidon teleports away.

Nico di Angelo and Mrs. O'Leary, along with Percy, Shadow Travel from Camp Half-Blood on Long Island to the home of May Castellan in Westport, Connecticut and later the two are sent to the Jackson Apartment in Manhattan by Hestia.

During the fight between Medea and Jason, Leo and Piper, Medea teleported away in a puff of smoke. After freeing her, Hera sends Jason Grace, Piper McLean, and Leo Valdez from the Wolf House in California to Camp Half-Blood.

Hecate teleported away in waves of darkness.

The Sword of Summer

After retrieving Thor's Staff, Thor teleports Magnus Chase, Samirah al-Abbas, Blitzen and Hearthstone to where they most needed to be.

After Hearthstone releases Inge from his family‘s services, she teleports away.

Meg McCaffrey teleports away from her guard by touching a plant growing in a crack in a sidewalk.

After the Battle of San Francisco Bay is won and Apollo is healed, Diana teleports away.

After becoming a god again, Apollo sends duplicates of himself to check in on everyone he met during his six months as a mortal. 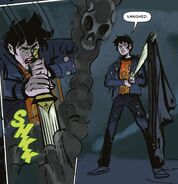