God of Writing, Calculation, Scribes and Knowledge
God of Magic and Science
God of Moon
Ja-hooty (by Sadie)

Thoth, also known as Djehuti, is the Egyptian god of writing, calculation, scribes, knowledge, moon, science and magic. He is the eldest of Ra's sons and the loyal scribe of Ma'at.

His animal is the baboon. When Set imprisoned Osiris, Thoth attempted to mediate an agreement, but Isis convinced him that he should join sides with her and Horus. During his battle with Set, Horus had one of his eyes torn out; Thoth replaced it with moonlight, creating the Eye of Horus. He also had to heal Isis when Horus inadvertently cut off her head when she attempted to stop him from fighting Set while weakened.

Thoth was also the grand vizier when Ra, Shu, Geb, Osiris, and Horus ruled as pharaohs. When Horus, the last pharaoh, chose to leave the mortal world, he made Thoth his successor and he ruled peacefully for over 3,000 years.

As mentioned in The Red Pyramid, Thoth plays an important role in the birth of Nut's children. In the myth, Nut goes to him for advice after Ra forbids her from giving birth on any day of the year. He comes up with the idea of gambling with Khonsu and helps Nut create five new days with moonlight. However, in the original myth, it was Thoth himself who did the gambling, and Thoth bet his secret knowledge, which Khonsu desired out of jealousy. After winning, he became a moon god (there were multiple).

Thoth is also credited by the Ancient Egyptians for revealing hieroglyphics, medicine, and astronomy (as part of his association as a moon god).

Thoth is also associated with justice, and the phrase "straight and true like Thoth" was used to show impartiality when judging a situation and/or crime. He was also known for being persuasive, as seen in the books when he convinces the House of Life to abandon the Path of the Gods.

Thoth also generally played a large role in mythology, and was believed to have been the one to civilize human kind. At one point, he was even considered one of the creators of the world.

Seshat was sometimes said to be either his daughter or wife, and Ma'at was also said to be his wife at times.

Thoth helps Sadie and Carter Kane defeat Set by telling them the contents of his book, which contains the spell that can send Set deep into the Duat. He also tells the siblings that there are two ingredients needed for the spell; the Feather of Truth and Set's Secret Name. Thoth, however, gives them a test in exchange for the information, using shabti to record their battles and leaving them a picture of Bast and Apophis to give them a clue about who Bast really is and what their mother died for. He, however, refuses to explain the picture as it is not on their deal. Thoth is later seen in the Hall of Gods, his image flickering between his human form and a grassy green sphere.

Thoth is seen when Carter and Sadie return Ra to the throne, and unlike everyone else, chooses to dress casually.

After learning about sheuts from Anubis and how they could be used to destroy Apophis, Carter and Walt Stone travel to meet Thoth to try to learn the needed spell from him. Thoth is found by them on top of his new pyramid, throwing hieroglyphic grenades at demons attacking his pyramid every six hours. Carter and Walt arrive and help him fight off the demons. When Apophis possesses a winged version of Face of Horror and taunts Carter, Thoth saves him and kills the demon. He then makes Carter sleep for a while and discusses Walt and Anubis' plan with Walt, but refuses to tell Carter what they were talking about though he pushes Walt to do so.

Thoth reveals that Apophis has trapped him in the pyramid and he can't escape through the Duat and that he believes that Apophis is doing the attacks to distract him from helping them. Thoth confirms what they learned from Anubis about shadows and that what he calls a shadow execration can be used to destroy Apophis. However, Thoth is unwilling to help them learn the needed spell and find Apophis' sheut as its forbidden knowledge among mortals and he could get into serious trouble for telling them, more than he already has for what he's done for humanity. When Carter points out the only other choice is to let Apophis destroy the world, Thoth admits that that's why he's even still talking to them about it. While he won't tell them himself, he directs them to The Book of Thoth, a field guide of sorts he wrote in his youth that contains a lot of information about the gods including the location of their sheuts. The location of Apophis' sheut is in that book. He informs them how an evil magician named Setne stole the book and used it to create a shadow execration before he died.

Thoth doesn't know where the book is as Setne hid it well even from him and he tells them that while he couldn't endorse giving mortals knowledge of how to destroy a god, even Apophis, hypothetically Setne could give them what they needed if they could convince him to help. Thoth then informs them that there is a deadline as Setne will have a trial before Osiris at sunset and will likely be obliterated for all of his crimes. Thoth sends them off before sunrise and the next attack but warns Walt that he likely won't survive long enough to do this and that what he has planned is dangerous and has never been done before. While Thoth doesn't tell Carter what he's talking about, Walt promises to explain to him and Sadie. Thoth also informs them that he will only be able to hold on until sunrise the next day, the time of Apophis' rising which he believes is designed to prevent him from interfering.

When Carter summons the gods to help fight Apophis after succeeding in getting his sheut and Ra being reborn, Thoth is not one of the gods that show up. Carter is disappointed as he wishes that Thoth and more of the gods that were friendly to him showed up, but he knows that Thoth and the other gods have their own problems fighting off attacks from Apophis' forces. After Carter and Sadie destroy Apophis, Thoth leaves Earth for the Duat with all of the other gods.

Thoth is a rather comical god when he first meets Carter and Sadie. He seems to be a bit absent-minded and took some time to realize that he was not in Memphis, Egypt, but actually Memphis, Tennessee. He has also taken a liking to barbecue and music (claiming to have discovered Blues music), which he refers to as forms of magic and, as he is the god of wisdom, a passion for education and books. He seems to marvel at computers and technology, wishes he had a bigger laboratory and has multiple ibises working on computer essays.

Thoth is mostly a benevolent deity and arguably one of the least egocentrics of the major gods. He always does what is necessary to help others and aside from a little recognition, never asks for anything in return. He was willing to stand up to Horus and Isis when Carter and Sadie met with him and treated Carter and Sadie well. In The Throne of Fire, when Carter and Sadie are shown the Hall of the Gods as the senile Ra prepares to leave, Sadie remarks when Thoth looks at her that she gets the feeling that he is the only one who pities her discomfort.

There is also a darker side to Thoth's personality. He is a very calculating god and gave tests to Carter and Sadie to see if they are worth the information he was going to give them. Thoth also seems to hold grudges, admonishing Horus and Isis for coming to him for help after the last time Set and Horus fought. He convinced Iskandar, the Chief Lector, to adopt the House of Life's anti-god policies while maintaining his good standing and freedom.

Thoth appears as a young man in his twenties with wild blond hair, wire-rimmed glasses, jeans and a lab coat. The sleeves of his lab coat seem to contain letters and words in all languages which he could use to conjure anything he wanted. While the other gods wore elaborate and special clothing or armor for large events, like Ra's first voyage back into the Duat, Thoth prefers to wear his jeans and lab coat most of the time. Thoth's eyes are many shifting colors, like a kaleidoscope, which Sadie finds somewhat disturbing. However, in the picture above, he is shown having brown curly hair.

As a son of Ra, Thoth is an extremely powerful god. His exact abilities are unknown but are likely to be powerful and to do with writing. Though, Thoth may have some healing abilities as he is shown to heal Isis.

In the Graphic Novel adaption 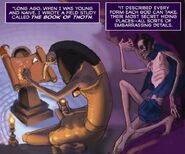