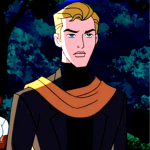 I came here because I'm currently writing a story that has nothing to do with Percy Jackson and the Olympians, but does focus on Egyptian mythology. I was told by Annabeth and Percy that you'd be more familiar with this mythology, as far as the accuracy goes.

Glad you asked this question. Sorry if I didn't respond sooner, I was too busy with work.

The reason why people associated Horus with Ares/Mars was due to the fact that Horus originally started as a god of war and the sky. (The Egyptian pantheon had many gods of war, even Set was considered a god of war). Eventually he became considered as the opponent of Set and the son of Osiris.

I can understand why you think of htis. I was pretty surprised when I came across this the other day while I was browsing through the internet. I think in the future we'll probably update this page to fix it.

I apologize in advance if I sound a bit rude when saying this; but if you respond to anything I say to you, could you please do it on my talk page, so that I know you responded to it? Thank you.

But anyway, I would still like your advice: In the story I told you about earlier, I was planning on having a plot device where the Egyptian gods act as counterparts to the planets in our solar system, including Pluto. I just want to be sure if I'm accurate with it (because in this story, this kind of accuracy is a must). Here's what I've got:

I guess I probably do have one more question (and hopefully I won't keep on bothering you with this), but would you know the Egyptian equivalent of Hyperion? --Yes, it's PSYCHID! He talks! He does stuff! 02:09, May 15, 2016 (UTC)

The reasons why I asked about any Egyptian equivalent of Hyperion was because I was going to use it as a plot point where they'll be used as a means to recreate the universe. But then I remembered I was going to use Apep. Talk about a waste of a question, huh? (But I still thank you for your help with that one.)

I apologize in advance if I sound a bit too "nerdy" for your tastes. But here we go:

I don't know your stance on it (and if you're not familiar with it or a fan of it, I understand completely), but I consider myself a Yu-Gi-Oh! fan. I joined a site called FanFiction.Net in February 2006; and there was a YGO dueling story I've always wanted to write since back then. Sadly, I consider writing multi-chapter stories a lot tougher than writing single-chapter ones, and I had to restart it at least ten times (no kidding).

But enough about my sob stories. Back to the subject at hand.

I'm also a fan of BIONICLE, a LEGO franchise that lasted from 2001 to 2010, and then was rebooted in 2015. BIONICLE was one of my main inspirations for making this, and still is today. And that's kind of where I may need your help again.

I can probably find the rest on my own, but I need help in finding just one. In BIONICLE, there was one character named Kopaka, the Toa of Ice. I strongly doubt there were any Egyptian gods relating to cold weather, so I probably won't ask you to find me a god of that. But maybe I would ask for the name of an Egyptian god relating to storms and whatnot? (Anyone but Set, that is, since this god I'm looking for is moreover on the good side.)

I also apologize if me asking you these questions make me look lazy on my end. But honestly, I don't consider myself an expert in Egyptology/Egyptian mythology as the next. And I truly appreciate you helping me with this. If you want, if I get the story published, I'll give you credit for helping me with this.

Before I forget, I have one other question to ask: I don't know if I should have Set or Khonsu be the main antagonist of my story. I'm tempted to use Khonsu, because he was the Egyptian counterpart of Saturn, who in turn was the Roman counterpart of Kronos.

Hi Michael. Could you give sources for all the pictures that you are adding? Are they official paintings or other things? If you could add it into the description of pictures that would be nice (: SayuriDarling | And she tried to survive living her life on her own. 17:48, June 14, 2016 (UTC)

I was just trying to have fun. I is sorry :c

Hey Michael! I was wondering if you wouldn't mind if I nominated you for Rollback? I think you would be great for helping to fight Vandalism. SayuriDarling | You’ll understand why storms are named after people. 18:42, October 7, 2016 (UTC)

Greetings Michael Morningstar, we have never really talked before, but we have both helped this wiki grow. I'm her to congratulate you on your nomination for rollback and wish you luck!

Hi Michael! I was wondering if you would be interested in Content Moderator rights? (: SayuriDarling | You’ll understand why storms are named after people. 03:31, January 25, 2017 (UTC)

Hello Michael. This is a fairly new user. I think this user is a good candidate for rollback: Shootingdragonnova. I read the requirements on the request page. I feel Nova satisfies the requirements, even though he is quite new. Could you have a look at the request and let me know? Thanks and regards, VishwaUser (talk • contribs) 06:13, May 24, 2017 (UTC)

Hello, why did you revert this of my edit?

Deletion log. Broken links. I would recommend looking at R:C instead of WikiActivity page for a full picture of the Wiki. SayuriDarling | "You are not weak just because your heart feels so heavy." 14:11, June 13, 2017 (UTC)

Hey, Michael. I was looking at WikiActivity and noticed you had some difficulty reverting vandalism. By going to the most recent edit made by a vandal, you'll see the word/link "Rollback" and can click that and undo all edits made by them when they made multiple edits in a row. You can also do this on the page history page, and it should be right beside "Undo". Hope this helps! Zane T 69 (talk • contribs) 22:30, August 10, 2017 (UTC)

I actually do not see why you reverted my edits. There is no specific rule against putting photos in Powers and Abilities sections (like I did with hera, Demeter, and Gaea). In fact, the reason I did it was because Hades had a photo. I mean, I love Hades, but I always found it strange and unfair that he should have a photo in that section and non e of the other gods should. I feel everything should be balanced. Just my two dents. (Zandris Hugal (talk • contribs) 07:37, August 29, 2017 (UTC))

So, if your edit on Mythologies is any indiciation...there is a source for the Celtic and Chinese books?

Hi Michael! I just wanted to ask: do you come from an Iranian background? I have seen you referencing various elements from Iranian mythology on the forums. Thanks and regards, VishwaUser (talk • contribs) 05:35, March 25, 2018 (UTC)

Retrieved from "https://riordan.fandom.com/wiki/User_talk:Michael_Morningstar?oldid=559952"
Community content is available under CC-BY-SA unless otherwise noted.