Yancy Academy is the private boarding school that Percy Jackson attended in the sixth grade during the The Lightning Thief. Known classes that can be taken in this school include Pre-algebra, English, and Latin. It is a school for troubled kids, but many of the students were from well-off, rich families unlike Percy. It is well constructed, with lush pine trees all around.

After the field trip to the Metropolitan Museum of Art, Percy Jackson spends his time thinking about the incident and studying for his finals before getting expelled. 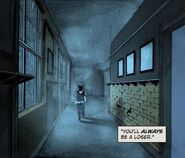 Chiron's office
Add a photo to this gallery
Retrieved from "https://riordan.fandom.com/wiki/Yancy_Academy?oldid=566598"
Community content is available under CC-BY-SA unless otherwise noted.