The Lost Hero
Zeus's Cabin (#1) is the cabin that houses demigod offspring of Zeus.

Zeus's Cabin is described as looking like a white marble box, with heavy, white columns in the front. This cabin is the biggest and bulkiest of all the cabins. It has polished bronze doors that shimmer like a hologram, and have lightning bolts streaked down them. The dome-shaped ceiling is decorated with moving mosaics of a cloudy sky and thunderbolts. It also thunders all the time.

The cabin has no furniture inside at all, described as looking like a bank. It only has alcoves with golden eagle statues and one intimidating statue of Zeus in the middle. It is later described as looking like a glaring hippie that was ten feet tall and has sight of every place in the room except a corner where Thalia Grace had put her sleeping bag, and a few photos of herself, Luke Castellan, and Annabeth Chase when they were younger.

Children of Zeus are extremely powerful half-bloods due to their father being one of the Big Three.

All of Thalia's items are no longer in cabin as of The Titan's Curse: 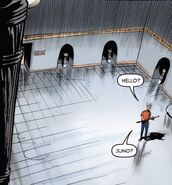